My last trip to Komodo was a successful one, not only because of the data I collected or the nice group on the boat, but also because I managed to have a good look at two very elusive critters, one of them a first! I had seen Mandarinfish (Synchiropus splendidus) before, but this was the first time I had a proper look at a Picturesque Dragonet (Synchiropus picturatus). 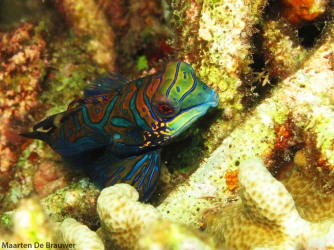 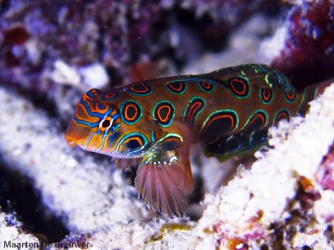 Both species are closely related Dragonets belonging to the genus Synchiropus. They are exquisitely coloured, which makes them big hits both with divers and marine aquaria hobbyists. The colours and patterns of the picturesque dragonet have earned it the synonym of “psychedelic mandarinfish” or even “LSD-fish” in German! Of the two, the mandarinfish is best known to divers, probably because it is found more frequently in areas where divers are likely to dive, unlike its psychedelic sister-species.

Both species are found in the Indo-West Pacific, they range from the south of Japan to the north of Australia. The best places to spot them are Indonesia and the Philippines. They are found in sheltered lagoons, usually in areas with coral rubble. You can also find mandarinfish in stands of branching corals. Picturesque dragonets are more frequently found in areas with silty bottoms close to mangroves. Both species are shallow water fish that are rarely seen deeper than 20m.

The best time to see mandarinfish is at dusk or late in the afternoon on overcast days. At these times the fish come out of hiding to spawn. Both species live in small social groups which usually consist of a male and a few females. The males are easily recognized by their larger size and long dorsal fin.

Two Picturesque Dragonets (female in the front, male at the back)

As is the case with many secretive critters, we don’t know very much about them. The things we do know show that there is more to them than just a pretty face. For example, they secrete a thick mucous that might even contain toxins. According to the literature, this mucous smells bad and tastes bitter, which makes me wonder exactly how they found this out 😉 Regardless of research methods, this toxicity means that the highly visible colours could in fact be a warning signal to potential predators, much in the way nudibranchs advertise their toxicity. For those interested in impressing their fellow divers, this trick is called “aposemetic colouration“. 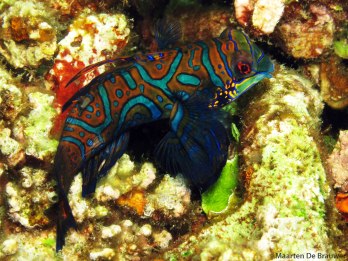 Mandarinfish are tiny carnivorous fish, which feed on tiny prey. Too bad they are so small, just imagine how much fun it would be to see a great white shark in the colours of a mandarinfish?!? Until the day an evolutionary trip-up creates a giant mandarinfish stalking the oceans, they feed mainly on small crustaceans, small molluscs and fish eggs. Which might be more convenient for the many people that keep these small fish in aquariums.

And make no mistake about it, both species are VERY popular in the marine ornamental trade. Research in Batasan Island (near Bohol) in Philippines showed that in 2000, between 1800 to 2400 mandarinfish were exported per month! If you have ever searched for mandarinfish while diving, those numbers will seem even more impressive. Fishermen usually catch the fish with miniature spearguns, since other methods are not as successful. This method obviously inflicts damage on the fish, often leading to the fish dying either shortly after being caught or during transport to aquariumshops. Another problem with catching mandarinfish for the aquariumtrade is that people prefer larger fish. A trend that causes the larger males to disappear first, which can in turn lead to reduced reproduction rates for the remaining fish.

These lovely critters might be very popular with aquarium enthusiasts, unfortunately they are difficult to keep alive in a tank. The fish require specific food and shelter, lack of those are the cause of many mandarinfish dying shortly after they’ve been bought by their new owners. There have been some reports of mandarin spawning in tanks, but raising the larvae to healthy adults is still difficult. As far as I could find, the vast majority of mandarin fish sold in aquarium shops are still caught in the wild, which might have a big impact on fish populations in the ocean.

Might have a big impact, since we don’t really know. Neither species has been assessed by the IUCN, so we don’t know if populations are in decline and if they are at risk of extinction. So until we do, enjoy looking for them during your dives, but think twice before buying one!

It’s that time again, after a few months of hiding behind my computer I’m starting the second big fieldwork season to collect data! I just arrived in Bali to sort out the last preparations for what will hopefully be a productive three and a half months of data collecting. I’m pretty excited about this trip, as I will be visiting some amazing places again where I’ll be working with great people! 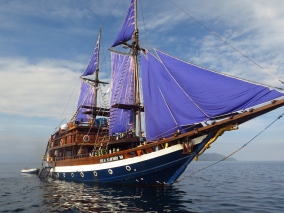 Home for the next 2 weeks

It all kicks off early tomorrow morning, when I’m leaving on a liveaboard trip to Komodo for two weeks. Safari Bali has once again kindly offered me a place on the Sea Safari VII, so I should be very comfortable while I’m trying to find frogfishes, ghostpipefishes and maybe the occasional manta ray or dragon. Once I get back from Komodo, I’ll be spending a fair bit of time in Bali again before heading to Lembeh Strait. The main thing I’m trying to figure out in Indonesia this year, is which human factors have the biggest impact on muck critters.

Like last year, I will again be doing presentations about marine biology and having long conversations with divers while I’m on the boat and staying at dive resorts. Some people might see this as a time consuming interruption of valuable research-time, but I really enjoy this aspect of my fieldwork. I feel it’s important as a researcher to share what you are doing with people who aren’t in academia themselves. What would the point be of all the work we do, if only a very select group of other researchers get to know about it? 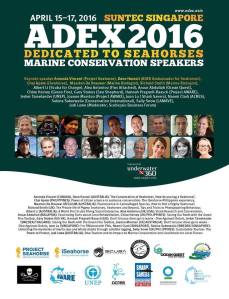 Which is why I am looking forward to the next stop after Lembeh: ADEX in Singapore. ADEX is the largest dive expo in Asia, with thousand of divers coming over to try to decide where to go for their next trip or what the newest trends are in the scuba diving world. I am very excited to have been invited to give a few talks about my research. In line with the theme of ADEX this year (Seahorses), I’ll be talking about pygmy seahorses, which I haven’t really done yet on this blog…

For the final leg of this trip I am heading back to Dauin in Philippines. Those of you who have been following the blog, will understand that I am rather happy that my good friend Luke (aka the Science Hobbit) is joining me again! Together we will be trying to figure out the best methods to study newly settled (=baby) critters. If you want to know how we’re planning to achieve that and whether or not we’ll succeed, keep an eye on the blog 😉 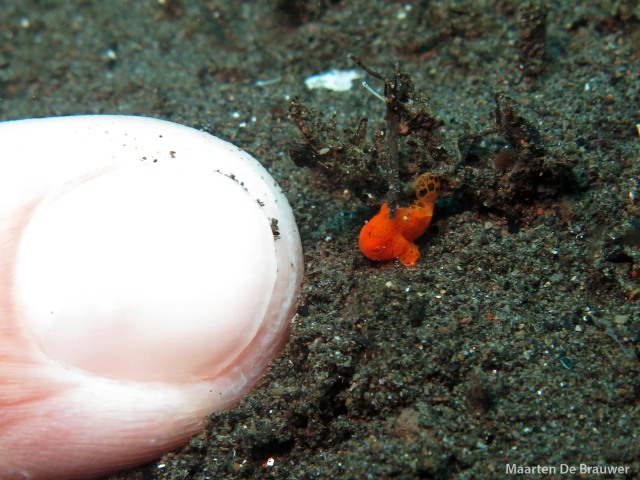 There was some VERY exciting news last weekend, the elusive Psychedelic Frogfish (Histiophryne psychedelica) has been spotted again in Ambon! This very rare and very trippy frogfish has only been described in 2009 and has hardly been seen again since. Practically nothing is known about them, except for the fact that they are amazing! Here is a video (property of Dive into Ambon) to prove it:

The psychedelic frogfish has only ever been seen alive in Ambon and they don’t seem to get much bigger than 10cm. Their exceptional colouration provides excellent camouflage and is thought to mimic coral species like Symphyllia sinuosa, Pectinia lactuca and other corals with similar morphology.

As a species of the genus Histiophryne, Psychedelic frogfish are “egg-brooders”, meaning they keep their eggs attached to their body to protect them from predators. It is even believed that they might use their eggs as bait to lure fish in that don’t recognise the eggs are attached to a predator larger than themselves! This is what it looks like: 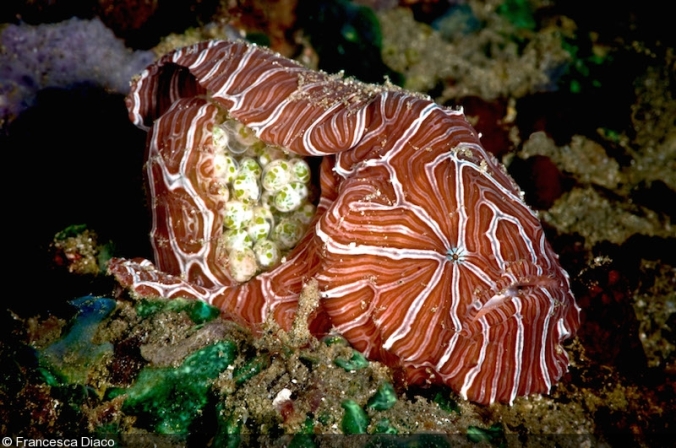 Who could not get very enthusiastic about a fish this bizarre and beautiful? Just too bad I don’t have time to go to Ambon myself any time soon 😉