Great news, I am on the road again for a new fieldwork adventure! Three days ago I left Perth to join a great team of researchers for a week of marine science action in Oman. I will try to post a few updates as we go along, much in the same way as during my last fieldwork trip.

On our way to the Musandam reefs

The trip is organised Dr. Joey DiBattista and Dr. Alyssa Marshell, as a collaboration between the Australian Museum and the Department of Marine Sciences and Fisheries at Sultan Qaboos University in Oman. Joey and Alyssa received funding from the council for Australian-Arab Relations (CAAR) to study the fish biodiversity in Oman and to develop methods to monitor that fish diversity more efficiently. Ultimately, the goal of our work here is to support the management of marine resources in the region. 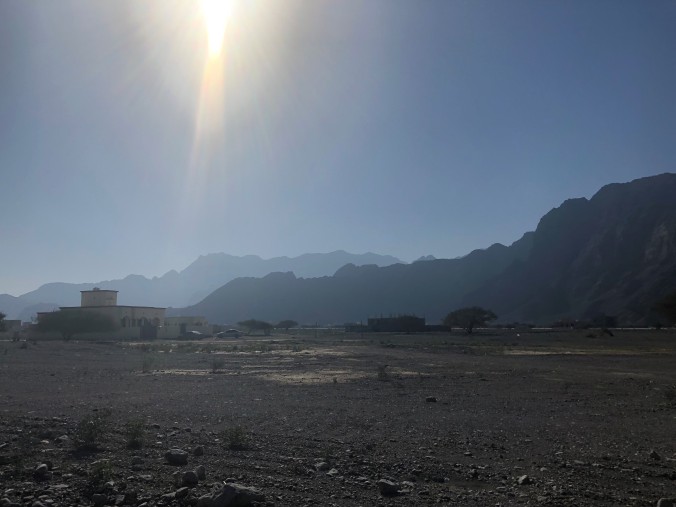 Most of the trip consists of diving in different places across the country. I am writing this blog in Musandam, a stunningly beautiful area in the north of the country. We are surveying fish, collecting fish and water samples for genetic research, and testing new methods to collect environmental DNA. We will be working here a few more days before flying back to Muscat.

The last leg of our trip is dedicated to a workshop in the Sultan Qaboos University During the workshop, local and Australian scientists will give presentations on their work, and most of us will also present some of our own work that might be of interest to researchers in the region. I’m very much looking forward to the discussions and ideas that will come out of this workshop, they’re one of the more exciting aspects of these kind of research trips!

Well, that and the diving and exploring parts of course 😉

Keep an eye on the blog in the coming days, I’ll post a few updates as we go along!

In a recent poll organised by the Australian Society for Fish Biology and Lateral Magazine, the Leafy Seadragon (Phycodurus eques) was voted as Australia’s favourite fish. This exquisite critter definitely deserves its place at the top, to celebrate it amazingness I wrote a blog about it. This blog appeared originally as an article in Lateral Magazine, you can find the original version here.

According to the popular stereotype, marine biologists spend their careers diving on colourful coral reefs, cuddling dolphins, and wrestling sharks. Unfortunately, the truth is a lot more mundane; we are more likely to spend our days diving into data analyses, cuddling too many cups of coffee, and wrestling grant proposals.

But sometimes we get lucky enough to work with animals that exceed the wildest stereotypes. Studying marine life is always exciting, but some animals are so unique they just stop you in your tracks; they make you thank your lucky stars for not listening to your mother when she said ‘marine biologist’ was not a real job. 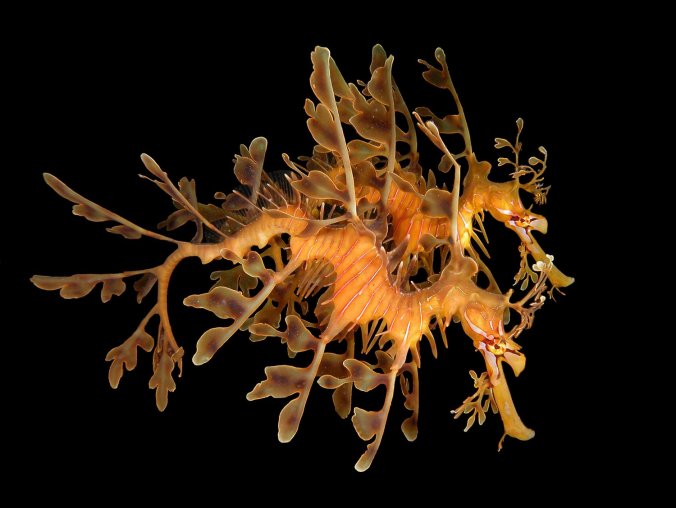 For me, the ultimate awe-inspiring fish is the leafy seadragon (Phycodurus eques). “Leafies” only occur in temperate waters off southern Australia, and they are, to say the very least, unique animals — the kind that makes you wonder whether evolution had a stroke of brilliance or just a stroke. Seadragons belong to the Syngnathidae family, which also includes seahorses and pipefishes. Even in a family that is known for their oddly-shaped members, leafies stand out big-time.

These beautiful fish have the head of a seahorse and the body of a seaweed, with flamboyant leaf-like protrusions that wouldn’t look out of place at the Carnival in Rio de Janeiro. Leafy seadragons defy the idea of what a fish should look like.

Maybe that is why they are so popular with fish enthusiasts all over the world. Scuba divers fly halfway across the globe to dive in the cold waters off southern Australia, hoping to catch a glimpse of them. In the few public aquaria that display them, including Melbourne Aquarium, leafies are one of the absolute crowd-pleasers. For fish-lovers, this Australian endemic fish is at least as iconic as kangaroos or koalas.

Despite their popularity, we know surprisingly little about leafy seadragons. Adult leafies are one of the largest members of the Syngnathidae family, with adults measuring up to 35cm. Like seahorses, male seadragons carry their mating partner’s fertilised eggs; unlike seahorses, they do not have a pouch. Instead, females lay their eggs on the underside of the male’s tail, where they remain until hatching.

Leafy seadragons depend on kelp and seagrass beds as their habitat, where they blend in supremely well to avoid predators. Unfortunately, these habitats are in decline all over the world, including in Australia, caused by coastal development and potentially climate change. As a result, seadragon population numbers are decreasing, although the species is currently not considered to be endangered.

One would assume that the decreasing population numbers of a unique Australian emblem would inspire multitudes of researchers to study it. Strangely, this is not the case. A search of the scientific literature suggests that nobody has studied them in the wild for almost a decade. This lack of research on evolutionary distinct marine critters is unfortunately not unique to seadragons. It extends to many other species that do not fit in the ‘food’, ‘danger’, or ‘Pixar-famous’ categories in which landlubbers like to divide marine life. If so little attention is paid to the struggles of Australia’s most recognisable and charismatic fish, then what hope do other species have?

Time will tell what the future holds for the leafy seadragon. I, for one, am doing what I can to ensure generations after ours will continue to have their minds boggled by this incredible animal. If you care about seadragons, one way to help is to join citizen science projects such as iNaturalist or Seagrass Spotter. These projects collect observations from divers and snorkellers, directly helping scientists better understand and protect these animals and their habitats.

A short note about this blog: Two weeks after the poll I was awarded a research grant by the Sea World Research and Rescue Foundation to study the seadragons using eDNA. Hopefully the results that will come out of this research will help to better understand and protect these beautiful fishes.

I never liked going to school. Not as a kid, not as a teenager, and not even as a young adult. Maybe I just disliked being bored so often? Even in the classes I was interested in, I felt that just absorbing all the knowledge in world was not exciting. My impression was that science already knew everything and that new discoveries were pretty much impossible. That science had somehow “stopped”.

Well, let me tell you one thing, it most definitely has not! I was not learning “all the knowledge in the world”, in fact LOTS of new things are discovered all the time! Since this blog is about ocean critters, let’s look at some of the critters that have recently been discovered. In the last year alone, new seahorses, frogfishes, gobies, jawfishes, and many other species have been discovered. So if you thought you’d seen it all, think again 😉

A new species of pygmy seahorse was described 3 months ago by Graham Short and colleagues. This ridiculously cute little seahorse lives in Japan and is called Hippocampus japapigu (=Japanese pig seahorse). These little wonders are less than 2cm in size and have a wonderful honeycomb colour pattern. Unlike some other pygmy seahorses, the Japanese pygmy seahorse does not live in seafans, instead it can be found in hydroids, algae, or soft corals.

During the same expedition, Richard and Louw also found a new species of pygmy pipehorse! You might have never heard of pipehorses, but they are just fantastic. Sort of like a seahorse that disguised itself as a pipefish, or maybe the other way around?

Big news from Australia as well! A new frogfish species was described in the journal Copeia this week. The Narungga frogfish (Histiophryne narungga) is found in South and West Australia, and was named after the indigenous people living in the area. The beautiful new frogfish lives mostly in shallow water, where it does what frogfishes does best: mimicking sponges or other benthic organisms, hoping to catch unsuspecting prey that swims by. This small (less than 10cm), new frogfish is very much on my “critters to see before I leave Australia”-wish list!

The researchers describing the Narungga frogfish, Rachel Arnold and Theodore Pietsch, are pretty much the rock stars of the frogfish world. Together they have described 9 new frogfish species in the last 10 years, the most famous of which is the Psychedelic frogfish!

I’ll be honest, for someone who studies cryptobenthic fishes, I don’t know nearly enough about gobies. Luckily, other researcher do know a lot about gobies and they seem to be good at finding new species as well. This year a new species was discovered from the west Pacific Ocean. The polkadot dwarf goby (Eviota maculosa) lives in Indonesia, Australia and Pohnpei. Its small size, less than 2cm, probably explains why it has taken researchers so long to realise this was an undescribed species. 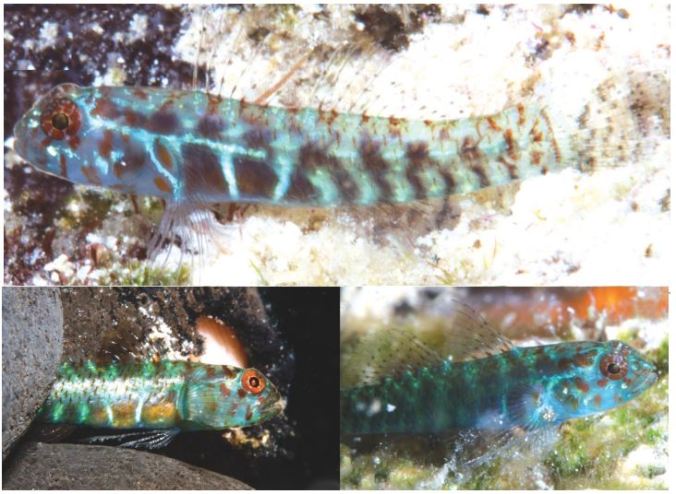 If you are not a keen muck diver or underwater photographer, you can be forgiven for not knowing about jawfishes. These cryptic fish live in holes in the sand and don’t venture out very often. Most notably, they are “mouthbrooders“, fish that hatch their eggs in their mouths. This week, two new jawfishes were described from Brazil. Thiony’s jawfish (Opistognathus thionyi) and the Brazilian dusky jawfish (Opistognathus vicinus) both seem to be endemic to Brazil, meaning they do not occur anywhere else. Thiony’s jawfish seems to live deeper than the Brazilian dusky jawfish, but otherwise, not much else is known about these new species.

This list of new critters is by no means complete. Many more species have been recently discovered, and many more will be discovered in the future. I find it very exciting that science isn’t ready yet and that there is so much more of the amazing natural world left to discover. If that doesn’t make you want to become a scientist, I don’t know what will… (We often have cookies in the office if that’s more your thing?)