The next species which I think deserves more attention than it currently gets, is the (baby) Zebra batfish (Platax batavianus). It is also known as the Batavia batfish, Humphead spadefish and probably a dozen or so other names. The reason I’ve taken a liking to this little guy is not just because it is an awesome little critter, but also because I finally got to see it after having it on my wish list for about 7 years.

Batavia batfish adults are not very different than most other batfishes, if possible they might actually be a bit uglier, in any case, they don’t really stand out. They do stand out however in the juvenile phase, and they do so rather magnificently! Check out this great picture Luke took a few days ago:

In the batfish genus, it is quite a common occurrence for the juveniles to differ greatly from the adults. As not to distract you in this post dedicated to the Batavia batfish, here are links to the juvenile Orbicular batfish and Pinnate batfish. They are almost as amazing as the Zebra batfish, so I do encourage to have a look at them after reading this post!

Zebra batfish are named for their juvenile pattern, which helps distort their outline, again providing camouflage to the rather slow moving fish. Very little is known about the ecology of this species (surprise surprise!) but these are a few things I managed to find from the literature: 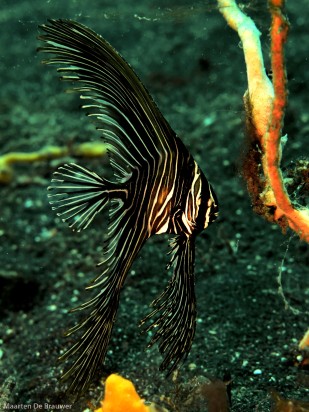 Conclusion for this little critter? It is better to be patient and go to the right places to see it in the wild instead of getting it in your aquarium. Not only will you be doing reefs a favour, seeing these gorgeous fish in the wild makes for a much more rewarding experience than just buying one.

Oh, and if you were wondering where it got its scientific name, Batavia is the old name for Jakarta (the capital of Indonesia). When Cuvier described the species (1831), this was how Jakarta was known, so I am guessing the original specimen he used to describe this species was either caught or shipped from anywhere near Jakarta.