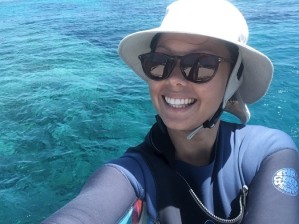 The latest guestblog on Critter Research is by Tanika Shalders. Tanika is a Technical Officer for the Marine Science Program at the Department of Biodiversity, Conservation, and Attractions in Australia. Her current work entails diving on some of the most amazing reefs in Australia and video analyses of surveys in Australian marine parks. In this guestblog she describes her recently published research on the effects of climate change on damselfishes.

It is currently spring in Australia, a lovely time to be outdoors. Nice temperatures (average maximum of 22), plants in full bloom, perfect picnic weather… just find a nice patch of grass, a cold beverage and some snacks.

Summer is just around the corner and here in Perth it can get very warm, with an average maximum of 31 degrees (although temperatures up to 40 degrees are not unheard of). Unfortunately, picnics are not as pleasant this time of year. It’s hard to find shade, you’ll likely get sunburnt and your drinks will get warm.

What do you do when the temperatures become unbearable? Head to the coast to cool off in the ocean? Hide in the air-conditioning? Increase your ice-cream consumption? We try to make ourselves as comfortable as possible, moving to a cooler environment where we have everything we need – food, water and shelter.

With this in mind, it is no surprise to learn that other animals are doing exactly the same thing when ocean temperatures rise. Over the past 5 decades ocean temperatures have been increasing due to climate change. There has also been an increase in heat waves.

Heat waves are becoming increasingly common across the world

Many people connect these events to coral reefs, so it may come to some surprise that the ocean in temperate (southern/cool-water) Australia is warming at least twice as fast than the global average.

In 2011, the south-west of Australia experienced a heat wave. The heat wave lasted more than 10 weeks and temperatures increased up to 5 degrees above normal. This event caused massive changes to the marine environment of south-west Australia. One of the most significant documented impacts was the loss of kelp along the south-west coast. In the warmest area (north) kelp disappeared completely. Changes have also been seen in other organisms such as fish and crustaceans.

Ecklonia radiata, the kelp species which was greatly affected by the 2011 heatwave. Source: foragersyear.wordpress.com

After the heat wave, we decided to investigate if fish had also been impacted by the extreme temperatures. We chose to look at territorial damselfish since they are ‘site attached’. Much like the Hobbits of Middle Earth, they don’t like to leave home. These damselfish farm and protect algae which they use for food and reproduction. This trait makes them a good species to indicate of change as it is unlikely individual fish will move from their home to a new location. However, juvenile fish (recruits) may set up camp in new locations.

Using diver operated stereo-video (DOV), we investigated where these damselfish lived before and after the 2011 heat wave, and how many there were.

We also saw a change in algae habitat. The kelp that dominated in 2006 had often been replaced by smaller forms of algae by 2015. This included the turfing algae such as those farmed by the damselfish.

So what does this mean?

These results show that both fish and their habitat are changing due to climate change. When warm water fish move to cooler water, they might push out the local cool water fish on their way south.

This process of warm water fish moving into cooler environments is known to the science world as tropicalisation – previously explained in a guest blog by the wonderful Dr Joseph DiBattista so I won’t go into detail here. Instead I will delve into one of the flow-on effects of tropicalisation: increased competition. 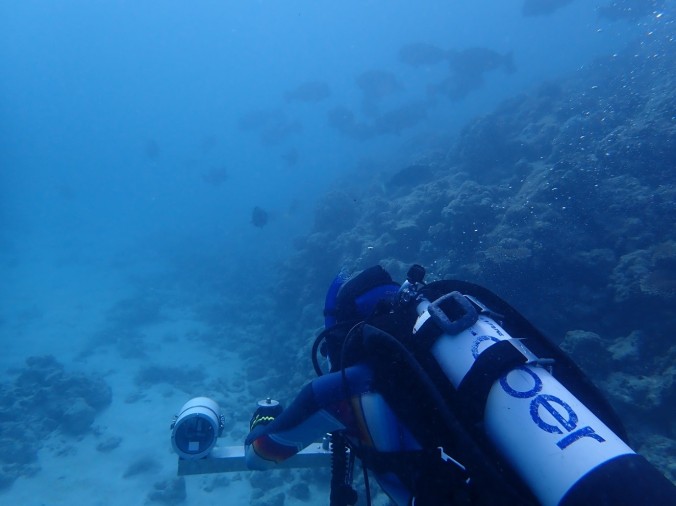 Competition happens everywhere in the natural world. Plants compete for sunlight, lions compete for antelopes, and high school boys compete for the same girl. Usually competition occurs over food, water, shelter, or booty. Any additional players entering such a highly competitive environment can have devastating effects.

The movement of warm water fish into cooler waters could increase competition for the local fish populations. Since these damsels eat the same food and are very territorial, this means they not only have to compete with each other, but also with new damsel species. It’s hard enough to compete with your siblings for the last helping of dinner – imagine having to compete with your whole street!

Often this means that the local species will have retreat from an area once the invading species starts competing with them for food. Fortunately in this case, it looks like the change in habitat meant there was more food for the damselfish. It is likely that this helped to support a larger number of damselfish by reducing competition.

Most people are starting to become aware that climate change is an issue, sadly it’s a much bigger problem than most believe. Scientists are just being to scratch the surface of understanding the full reach of its impacts. If you would like to learn more about climate change and what you can do to help, please visit this site to find out more.

Department of Biodiversity, Conservation and Attractions

Climate change might increase competition in the oceans. Photo Will Robbins, DBCA