So far I have mostly been writing about muck diving, critters, dive sites, but I haven’t really explained how researching all of this works. What do we get up to when we are diving? Do we look at weird critters and think “that’s pretty cool!” or do we actually do something more?

Perks of the job: Air ajo 3, one of the survey sites

First off: Yes, Luke and me very often think, talk and even shout under water about how very cool our critters are. We do however, try to get a bit more scientific than that. Since May this year we finished nearly 200 transects on 20 different sites, besides that we have also been collecting sediment samples and we took many, many pictures of the bottom of the sites we surveyed.

Surveying sites by running transects (we are actually doing “belt transects”, but that’s a technicality that’s not important now) is a way to try to tell how many fish there are in that area. The idea is to have a fixed measuring unit, so you can compare your counts to other sites. It would not make sense to just swim for a while, counting fish if you don’t know how much area you have covered. Without a measuring unit you might swim 500m in one dive, 300m on the next one and 900m in yet another one, making comparisons impossible. One way to deal with this, is by simply taking a measuring tape with you so you know how much you area you have covered. Before you do this, you have to decide how long your transects will be and how far away from the tape measure you will count fish. This way I know that with every transect, I cover an area of 50m2, and per site I investigate 500m2 of seafloor(10 transects).

Doing this on every site we investigate allows us to make comparisons. For example, at one site I found 3 Scorpionfish, but at another site I found 35 Scorpionfish. Since I used the same methods (both covered 500m2), I can conclude that there really are more Scorpionfish in one site than the other.

This obviously does not explain WHY there are more fish on one site than another. To try and explain some of the differences, we gather data on a few other things per site. Besides noting the depth we found species, we look at a few more environmental factors that might vary. The main two are benthic cover and the actual sediment. Benthic cover is just a fancy way of saying “stuff that covers the bottom”, to investigate this we take multiple photos of the bottom at each transect. Afterwards the photos get analysed to decide how much of the bottom was sand, algae, coral,… 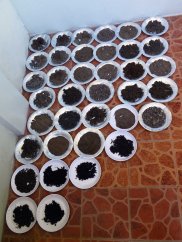 Sediment sampling is a bit more intensive. First step is easy, scooping up about sand at each transect under water. Next the samples have to be dried, packed and transported to the lab. In the lab it all gets wet-sieved, dried again, and then I can start the actual analysis. By the end of this month we will have collected about 200 samples, each of which take about an hour to process (+48 hours drying time). So a lot of hours of playing with sand ahead of me, let’s just hope it results into something useful 😉

3 thoughts on “Surveys: What do we actually do?”