Time to kick of December with a new guestblog, this one by none other than my good friend and science hobbit Luke Gordon! Luke is a very talented photographer whom I’ve been having ocean adventures with for many years. He is currently based in Canada, but continues his photography work there. Increasingly he uses his art as more than mere beautiful pictures, but instead uses it to tell important stories about ocean conservation issues. You really should have a look at his site, but until you do, here is an introduction to his most recent story.

Diverting the majority of my photography work towards conservation photo journalism has been an incredibly rewarding experience so far. I am very lucky to have met various people & organisations over the years which has now allowed me to get up close and personal to certain issues such as, establishing sustainable fisheries in Fiji, and now looking at salmon enhancement projects in British Columbia, (and of course Maarten, the first person worldwide to be dedicating a PhD solely to the soft sediment world & the creatures living there).

A ‘barren habitat’ could not be further from the truth, life here as evolved in the most intricate of ways, mimicry is the name of the game on the muck slopes. Species such as this Giant Frogfish (Antennarius commersoni) have evolved near perfect mimicry of sponges as they sit in wait for unsuspecting prey.

The critters of the muck for me, and I am sure for the large majority of photographers who have experienced this world, are the perfect definition of evolution and beauty of the natural world. Everything about this underwater paradise captivates me. From the story of its discovery to the most elusive of its organisms, muck is a magical world.

Let us start at the discovery, muck was discovered by chance by Bob Halstead, a man credited for pioneering the liveaboard industry and diving in Papua New Guinea, the story goes that whilst on a liveaboard in PNG the boat had moored up in Milne Bay for the night where it was calm, Bob Halstead still wanted to go for a night dive and despite the attempted dissuasion from local dive masters they went for a dive right beneath the boat. As the dive masters had predicted the bottom was just endless sand (soft sediment) from where the name of ‘muck’ originated, however the dive masters were wrong about one thing, and that is that there was no life down there, quite the contrary, what they found were creatures that looked like extra terrestrials, creatures that even the like had never been seen before, muck diving was born. 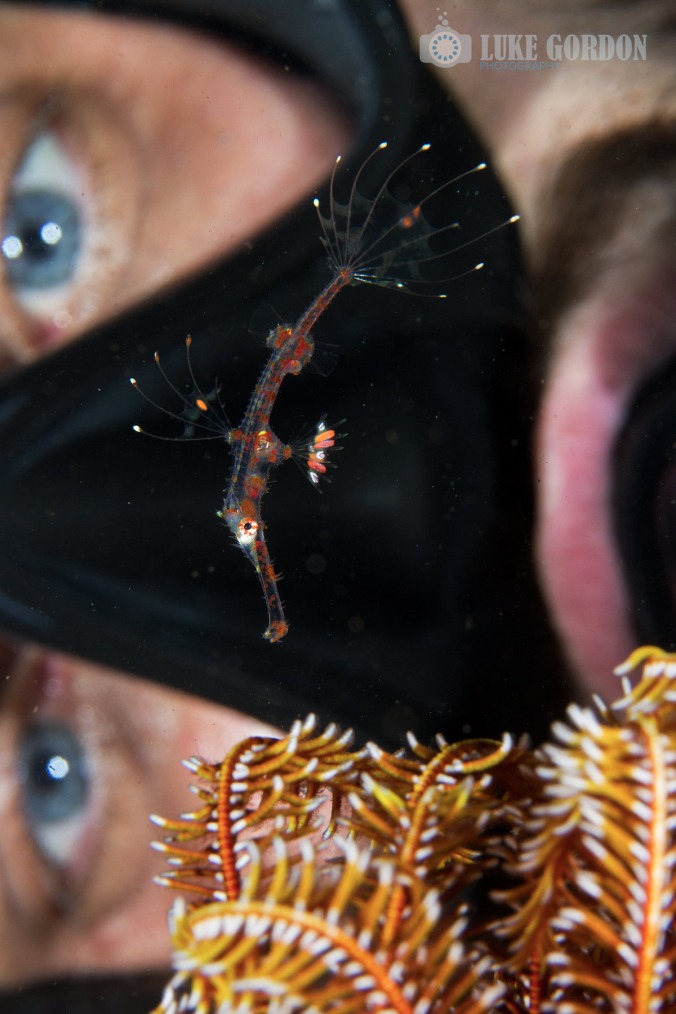 A tiny, recently settled juvenile Ornate Ghost Pipefish hangs above a crinoid. Even though this little critter doesn’t know it, the large ‘creature’ in the background is paving the way forward for future research into this unique habitat.

This all happened in the 1980’s, the diving community took a while to catch on, but boy has it caught on, muck diving now is a booming industry which supports thousands of people across Southeast Asia, as Maarten’s research will soon shed more light on. Divers and photographers (and now researchers of course) alike will travel half way across the world just to glimpse these weird and wonderful creatures, and these creatures are not behemoths like the African mammals, no, they are tiny critters which have evolved perfect mimicry and other adaptions to survive in a sandy desert, perfect photography subjects.

So how does a photo story fit into all of this?

Luckily enough for me (well not that lucky, I am referred to as a science hobbit by Mr. De Brauwer, yes, there is an earlier blog about this!) I was able to help Maarten with a large proportion of his fieldwork in North Sulawesi & Bali, Indonesia and on Negros, The Philippines. This gave me a fantastic opportunity to tell a story about this industry and now, the research being conducted. Currently it is quite staggering how many divers travel to muck locations around the world and it is equally staggering how little we know about the ecology, abundances and diversities of these creatures and the threats they face. This is a huge problem, as I have already mentioned thousands of people now rely on the jobs created by the industry and the money the industry brings into countries such as Indonesia and The Philippines. On top of this there is also no baseline data outlining the abundances and diversities of the creatures that have traditionally existed in these habitats, we have no way of gauging how these habitats are responding to the huge increase of direct and indirect anthropogenic pressures.

Arjay Salac is a dive master and one of the figure heads for Atmosphere Resort & Spa’s dive centre. Arjay is from a family of fishermen who live on the adjacent plot of land to the resort, after initially being employed as a landscaper when the resort first opened Arjay took a keen interest in the dive world going on. Enthusiasm and work ethic allowed him to move into a boat crewman position. Through continued excellence in the role he was offered the opportunity of being put through the resorts PADI dive master scholarship. Needless to say Arjay excelled and six years later is now one of the most respected dive guides in the area, eagle eyes are a description which fit Arjay perfectly.

This story is a way for everybody, diver or not, to understand how and why these organisms are so special, the pressures they face and how these tiny organisms have changed the lives of so many people across coastlines in Southeast Asia, and now, what research is being conducted to answer the many, many unanswered questions we have.

A Juvenile frogfish is measured after being caught in one of the S.M.U.R.F‘s. Frogfish, like many of the cryptobenthic organisms, are still unknown to science, this particular individual is most likely a new, undescribed species of frogfish (Antennatus sp.). Note from Maarten: this animal was returned to the ocean alive and well

This blog shows a few small extracts of the story, please visit my site for the full photographic story.

The future generation of instructors, dive masters and dive guides.