Time to ramp up the critter section after the Winged Pipefish and juvenile Batfish. Both of the previous critters are generally considered to look pretty or at least kind of cute, which is often not the case for members of the Scorpionfish family. 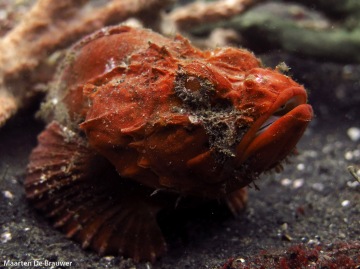 Ever since I’ve started diving I’ve been intrigued by Scorpionfishes and I never get bored looking at them. They are well camouflaged predatory fishes that lay on the bottom (true “benthic” critters!), waiting for unsuspecting prey to pass by. Or maybe they just use that as an excuse to chill out most of the time. The benefit of this lazy behaviour is that they are easy to photograph, provided you can find them of course.

What I’d like to do with this post is prove to you how beautiful Scorpionfishes can be. They often get a bad reputation because of their venomous spines and (supposedly) ugly looks, which is demonstrated by some of their common names: Devilfish, Dragonhead-fish (in German: “Drachenkopf”), Stingfish, Waspfish, … While it is undeniably true that you’d best avoid planting your feet or hands on species of the Scorpaenid-family, they are not aggressive at all. So if you keep a safe distance, you can take all the time you want to watch and/or photograph them.

Once you start really observing them, you will find out that they are absolutely amazing. There are many species (>300 worldwide), but you’ll commonly encounter about 10 of them while diving in the Coral Triangle. Lionfishes are also a part of this family, but they already get loads of attention, so I won’t talk about them here. Scorpionfishes are well camouflaged, but that does not mean they look boring or always have drab colours. I’ve seen them in all shades ranging from white, to red, green, yellow, pink and black. Most species rely on their colour (which they can change) to blend in with their environment. Others grow filaments resembling algae or get covered in actual algae and/or hydroids to blend in even better.

All of this would already be enough to classify them as pretty cool critters, but there is more. The main reason I like them so much is that they look as if they have very strong and (at least so I imagine) cantankerous personalities. Their big heads and grumpy, down-turned mouths just give them that extra charisma that most fish lack. Combined with their armoured heads that have spines all over them, it makes them look like rather bad-ass bottom crawlers. 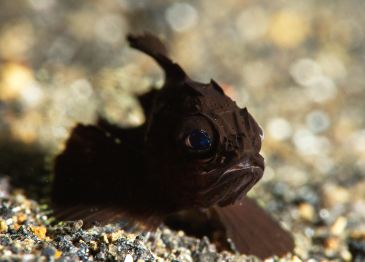 Here are some of the more commonly fond species and how to tell them apart. There is quite a lot of text, so if you don’t have time, just watch the pretty pictures: 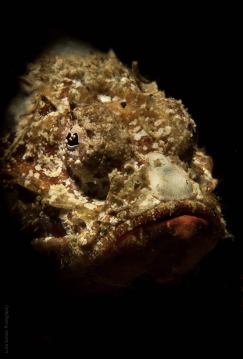 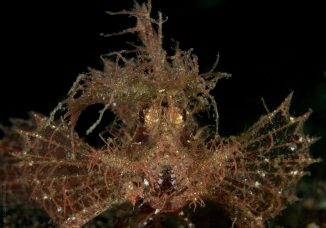 Enjoy the selection of photos (most of them by Luke Gordon) and next time you go diving, take your time to really look at any scorpionfish you might find.

7 thoughts on “The beauty of Scorpionfishes”